The Bay Haven Inn of Cape Charles is a historic Bed and Breakfast in a quaint little bayside town where neighbors actually know each other, guests are welcomed like family and the American Dream is alive and well.

The Inn itself is described this way on their website:   “… a turn of the century Colonial Revival home that depicts the extraordinary architecture of its time, designed and built in 1906 by renown architect James W. Lee. The highly sought after Norfolk architect constructed the original home for James W. Wilson, son of W.B. Wilson, a prominent local philanthropist and entrepreneur who founded Wilson’s Department Store in downtown Cape Charles. James Wilson and his wife, Alyce, along with their two daughters, Virginia and Georgia, occupied the home until James and Alyce passed away in 1957 and 1958, respectively. The home was a single family home for two families between 1960-1995. Great stories and memories were made in this grand ole’ gal and the current owners have reconnected with these families to preserve the magnificent history of the home.  In 1995, the home was restored to its original elegance by Leon Parham, an architect specializing in historic restoration projects, and owner David Phillips. Together they did a magnificent transformation of the once single family dwelling into a modern bed and breakfast.  Current owners Jim and Tammy Holloway are native Virginians who purchased the home in June 2011.”

Without a doubt, the building is marvelous.  It has good bones.  The structure is not only sound but it has been impeccably restored.  The interior is lovely, even captivating.  It is so comfortable that you feel as if you are in the home of a dear relative.  Outside, the landscaping is inviting and beautiful and the functional garden grows all kinds of delectable delights that the Innkeepers use in delicious breakfast dishes, share with friends and contribute to the local youth garden.  Which leads me to what really makes the Bay Haven Inn special and deserving of being on our Favorite People, Places & Things list for 2015.

Resident Innkeepers Jim and Tammy Holloway are extraordinary people who absolutely love what they do, love each other and love the town of Cape Charles.  As it said on their website, they are “come heres,” which in local parlance means they grew up somewhere else and discovered what “from heres” (locals) have known all along.  Cape Charles, VA is a magical place, just a few hours southeast of Washington D.C.  Jane and I had such a great time there during the week of our 21st anniversary that we started comparing it to the town of Mayberry.  That of course led to us joking and making up wild stories about some mysterious sea guardians that must slither around the empty streets after 11 pm taking over the bodies of any mean-spirited people.  We began looking for small signs, like people with patches of scales on their skin.  That’s the only plausible explanation we could dream up as to why people were so nice there.  I’m pretty sure I’ll be pitching that idea to a network soon.  Tammy and Jim were delightful.  They gave us plenty of space but one of them was there every time we had a question or needed something.  They both had a way about them that I wish could be cloned and shared with every other place I’ve ever stayed.

Jim’s a fellow Air Force guy, which made him A-OK in my book from the start, but it was his warm personality, sense of humor and wit that made him feel like an old friend.  Jim also makes a delicious breakfast (anytime, really) cake called “Jim Bread” that is sinfully good.  Tammy and Jane shared so many things in common that you would think they were sisters from other misters.  From the way certain citrus fruits affected them, to likes and dislikes, to their senses of humor, garden décor — and even sixth sense about people.  We were lucky enough to get out on the town with them one night, to enjoy a wonderful dinner with them and some of their friends at the Hook U Up Gourmet.  It was Cinco de Mayo and the food was amazing!  Prior to leaving for dinner, we shared a cocktail at the Inn — a margarita made with a mix from the local Blue Crab Bay Co.  Of course, one of the allures of a Bed & Breakfast is the breakfast.  Tammy not only knocked it out of the park three mornings in a row, but she also spent time with us sharing the local flavors, history, and life experiences that made our visit memorable.  There’s a lot more that I could say about both of them, but I should probably leave some things for you to experience when you visit — and you should — soon.  The Bay Haven Inn of Cape Charles should be on your B&B bucket list.  You’ll fall in love with the town, and I promise you, no sea monsters.  That’s really important, since the location is merely a few blocks from the secluded beach and bay.  It’s simply a place that seems to bring out the best in people.   You can book your stay directly with them at www.bayhaveninnbnb.com.

WHILE STAYING AT THE BAY HAVEN INN, WE VISITED: 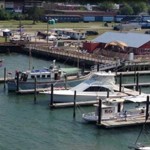 For our 21st anniversary dinner, we chose a room with a view and a laid back feel.  Jane and I enjoy seeing sunsets, listening to great music and enjoying ourselves where people can be themselves.  The Shanty provided all of that.  Although we visited a week before they would open their outdoor deck and feature live music, we were able to snag a great window seat that was the next best thing to being outdoors.  Managing Partner Jon Dempster visited us right before our incredible desserts of locally made natural ice cream atop warm chocolate brownies.  Jon was wearing his Boston Red Sox cap, which made him instantly likeable (because our son-in-law is also named Jon and also a Red Sox fan).  We had a great discussion about his young, growing family (that he clearly adores), music (another of his passions) and of course about The Shanty which he is totally committed to making into a Cape Charles staple.  I can see Kenny Chesney hanging out there, maybe even docking his boat nearby and filming a music video there.  Kenny, if you’re reading this, I’ve got the perfect song already written.  It includes some of the best fresh seafood you’ll ever have, Dark & Stormy’s and a fun-loving crowd.