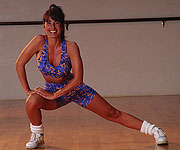 Just what you would intuit and just what our population of children are doing less and less of-not forming habits of all forms of exercise besides their  digits on digital media. Remember when a whole hour of serious exercise  was a mandatory class in K-12  and you really would exercise every day, or when weekends were spent outdoors more than in. Parents- TAKE NOTE  Dr Ryan

TUESDAY, June 2, 2015 (HealthDay News  ( summarized)) — Physical activity may reduce a woman’s risk of lung or breast cancer, a pair of new studies suggest.Women seem less likely to either develop or die from lung cancer if they engage in physical activity, and the benefits increase the more a woman stays on the move, Stanford University researchers found.“We saw that as levels of physical activity increase, risk of lung cancer decreased,” said lead author Ange Wang, a medical student at Stanford.Even active smokers enjoyed some protective benefit from lung cancer, when compared with couch potatoes who smoked, the researchers said.Meanwhile, a French study found that women may reduce by as much as one-third their risk of developing breast cancer by engaging in vigorous physical exercise. But that benefit did not extend to those who had ever taken hormone replacement therapy.Both studies were presented Monday at the annual meeting of the American Society of Clinical Oncology, in Chicago. Research presented at medical meetings is typically considered to be preliminary until published in a peer-reviewed journal.The Stanford study relied on data from the Women’s Health Initiative, a long-term federally funded project that tracked the health of nearly 162,000 women 50 to 79 years of age at 40 U.S. hospitals.

Of those women, the researchers focused on about 132,000 postmenopausal women to see if their exercise levels had any effect on lung cancer risk or death. During nearly 12 years of follow-up, just over 2,200 women developed lung cancer and 1,400 women died from the disease.

But women who spent more minutes per week on the move were less likely to either develop lung cancer or die from it, according to the findings.

The study looked only at minutes spent moving around, not at intensity of movement, Wang said. A minute of walking or mowing the lawn weighed the same as a minute jogging or lifting weights.

“It seems to indicate that you don’t have to kill yourself,” she said. “It doesn’t need to be strenuous. You just have to put the time in.”

What’s more, Wang and her colleagues found that physical activity seemed to help even smokers. Former heavy smokers and current smokers developed lung cancer and died from the disease less often if they were active, compared with sedentary women who smoked.

The benefits of physical activity were most prominent among women who were not obese, with a BMI — body mass index, a ratio of weight to height — under 30, according to findings. A BMI of 30 or greater is considered obese.

However, “it would be the wrong conclusion that women with higher BMI won’t benefit from physical activity,” Wang added.

It should be noted that the study only revealed an association between exercise and lung cancer risk. It did not prove cause-and-effect.

In that study, researchers reviewed 38 previous studies published between 1987 and 2014 that involved 4.18 million women and more than 116,000 cases of breast cancer.

Overall, a sedentary woman who began engaging in four to seven hours a week of mainly vigorous physical activity seemed to reduce her risk of breast cancer by 31 percent, according to lead author Cecile Pizot, a biostatistician with the International Prevention Research Institute in Lyon, France.

“This reduction occurred irrespective of the type of physical activity, the place of residence, obesity and menopausal status,” Pizot said. “Also, breast cancer risk seems to decline with increasing physical activity, and we observed no threshold.”

However, that benefit only applied to women who had never used hormone replacement therapy. Taking replacement hormones appeared to wipe out whatever protective benefit that exercise conferred.

But again, like the lung cancer study, this study only uncovered a link between exercise and breast cancer risk — not cause-and-effect.

ASCO spokeswoman Dr. Jyoti Patel said it makes sense that exercise could blunt breast cancer risk, since exercise can reduce the number of fat cells that produce the hormone estrogen, which can fuel breast cancer.

Following that line of reasoning, it also makes sense that hormone replacement therapy would negate the benefits of exercise, since women are replacing the estrogen that’s being reduced through physical activity, said Patel, an associate professor of hematology/oncology at Northwestern University Feinberg School of Medicine in Chicago.

“Of course it’s not in these women because they’re taking pro-growth hormones,” she said.

“I’m sure it involves multiple factors,” Masters said. For example, exercise reduces inflammation in the body, boosts the immune system and lowers body weight, all of which have been previously shown to limit overall cancer risk, he said.

Wang said physical activity might specifically help the lungs by improving lung function and limiting the deposition deep in the lungs of inhaled cancer-causing agents.

“All these things can play a role,” she said.

VISIT THE COMPREHENSIVE BOOK FOR ALL NEWLY DIAGNOSED CANCER PATIENTS AND THEIR FAMILIES: WHEN TUMOR IS THE RUMOR AND CANCER IS THE ANSWER www.whentumoristheanswerandcanceristheanswer.com/

For more on physical activity and cancer risk, visit the American Society of Clinical Oncology.