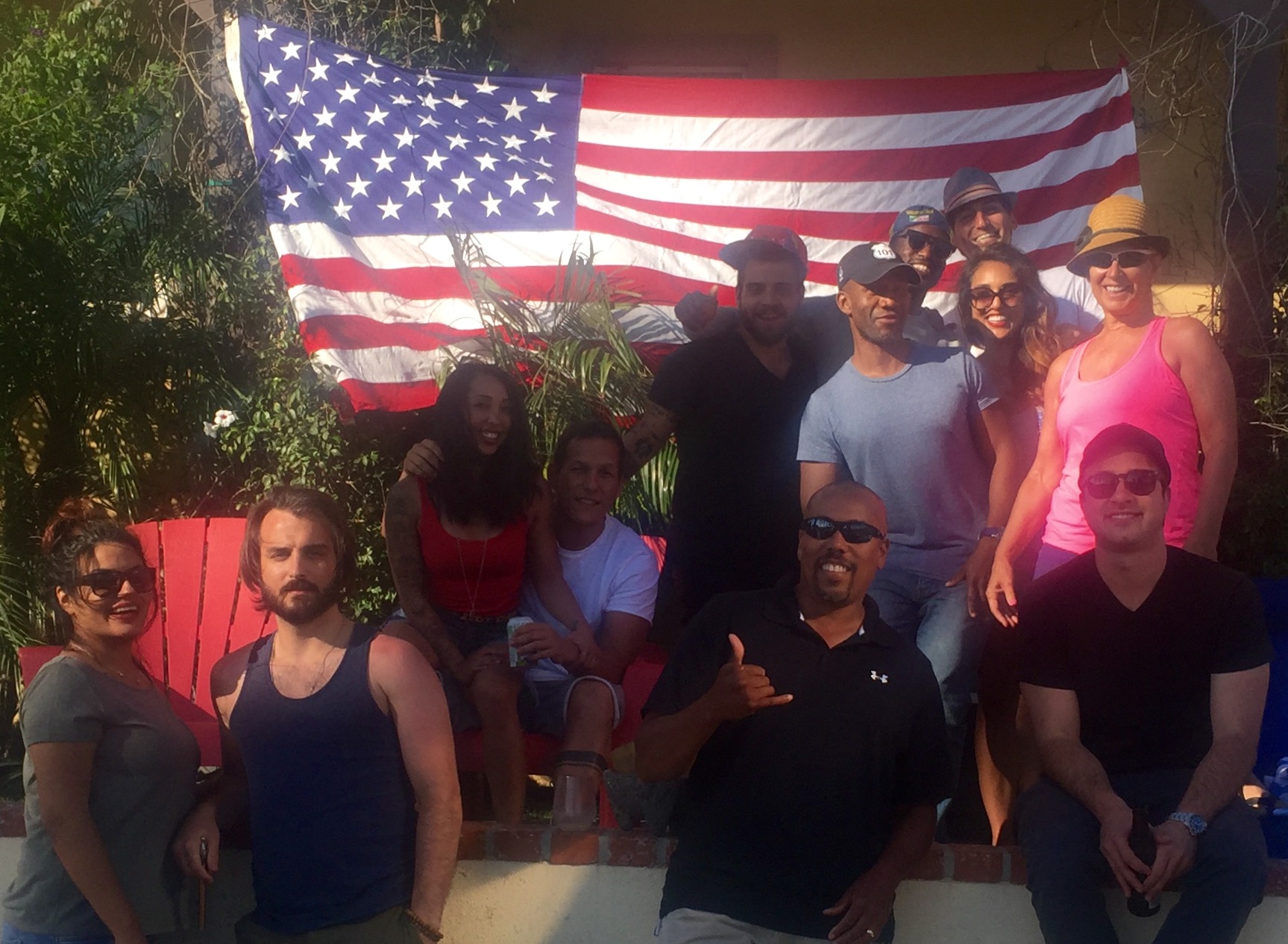 On Sunday, July 10th, there was a gathering in Santa Monica to share ideas about what loves means in a community.  Here’s the short video:

I know about horrible and negative.  As a 52-year-old Black man in America, I have lived in a perpetual state of conflict.  When I was a child, blacks and whites couldn’t marry.  There were separate entrances and drinking fountains.  In many places Black’s couldn’t vote, buy homes, get jobs or cross certain streets into certain parts of town.  All of this during the most mentally and emotionally formative years of my lifetime.  As those things changed in the late 60’s and 70’s, animosity towards Blacks grew.  Equal opportunity, desegregation and affirmative action programs were met with disdain, white flight and more subtle forms of conflict such as the infamous glass ceiling.  I’ve seen and experienced America wrestling with itself over race in ways that are utterly exhausting.  Things are done that are meant to hurt one group, but ultimately wind up hurting everyone through loss of productivity, drain on resources, mental and emotional health issues and ultimately, innocent lives being lost.

Here are just a few of many personal experiences…

I’ve experienced blatant racism by police, in the workplace and in life in general on so many occasions that I should by all accounts be filled with hate.  I could probably justify being hateful and angry and yes even fire back at the racism I’ve experienced with equal hatred and racism. 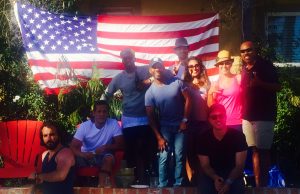 As a Black man in America who just wants to do an honest day’s work, laugh with friends, travel freely, love his wife and family, contribute to society and serve God, I am not unlike 99% of the other Black men I’ve ever met.  However, for most of us, every week we are reminded that although the days of slavery have ended, nearly 400 years of oppression in America have not.  Time and time again, we have seen images on TV of unarmed men being beaten or killed for no reason.  We’ve gone from being shocked at seeing Rodney King being beaten to almost expecting to see a video-of-the-week of someone being shot and killed by police before our very eyes.

During the week of July 4th, America witnessed two shootings by police that were senseless, tragic and polarizing.  In my opinion, police officers took it upon themselves to become judge, jury and executioner and were caught on film doing the same thing that many others before them have done year after year for hundreds of years.  The difference this time, however, is that they were filmed — with one of them even live streamed on Facebook.  America saw an innocent man dying in real time thanks to the heroic live-stream filming efforts of his fiancé.  July 4th was a national day of celebration, but by the 6th, Americas news channels were flooded with arguments about race.

On Thursday, July 7th, I sat down with the Santa Monica Chief of Police Jacqueline A. Seabrooks, Lt. Candice Cobarrubias, Becky Lantry, Char Bland and Charles Brown at Perry’s Cafe for a discussion about community policing.  We commended the Chief on the great work she and her officers do on a daily basis, we talked through our collective and individual pain, and we discussed how to be more proactive in ensuring the safety of officers and other citizens alike in our community.  I asked the Chief to allow me to interview her for my documentary film, “Walking While Black: L.O.V.E. Is The Answer,” to help bring peace officers and the rest of the community closer together nationwide.  She said yes and I agreed to make myself available to her in her ongoing community efforts to build bridges with citizens.  There was love at that meeting.  Love and respect and community.  Perry’s owner Richard Chacker and Chef Robin also joined us briefly and expressed their appreciation to the Chief and Lieutenant for their hard work.  It was all good and productive.

And then just hours later, the devastating news broke about the horrible actions of a shooter in Dallas.  Several peace officers lost their lives and others were injured while doing their duty during a peaceful protest.  Not only did the citizens of Dallas suffer that night, but all of us did because a man who went over the edge took it upon himself to act, in my opinion, as judge, jury and executioner of innocent lives.  He stated, basically, that he wanted to get back at white police officers and white people in general.  His actions were the result of what happens when a person allows hatred to overtake them.

Hatred and killing will do nothing but destroy more lives.  Love is the answer.  We need to turn our hearts to God and follow His direction. God commands us to love.  He is not asking us to do anything that He hasn’t done for us.  We need to turn our energy towards that thing that God has called us to do – – to love.  Love is the most powerful force in the universe. Put love into action and the walls of oppression must fall. Violence begets violence and ultimately leads to utter destruction. Hate creates a deep, wide chasm that separates people from each other and from God. When you express love you build bridges of connection. When you are willing to build those bridges, God will fill the chasm that separates us and we become one with Him.  Love heals all wounds.  Love fills all voids.  I choose to live out the words that my brother Abbey said to me as he lay in the hospital dying of cancer in 1998 — Love Is The Answer.

We need to turn away from our sin, from our hatred, from our bigotry, from our class warfare, from our religiousness, from our social stigmas, from our apathy and from all of the things that separate us and keep us from being a United States of America.

When Jesus was put up on a cross to die, He said “Father forgive them for they know not what they do.”  That’s the kind of love I’m talking about.

The problem for most of us is that we haven’t really been taught how to love.  Love is an abstract term used for everything from love of a sports team to a favorite kind of beer.

I have a simple model for how to love that each and every one of us can do, and the more we practice this, the more barriers will be broken down, walls demolished and chasms filled.  It’s called L.O.V.E.

LEARN about the community in which you live, work or serve.  If your job is to protect and serve as a peace officer, get to know the people in the community.  Fill your mind with knowledge about the things that make that community tick.  If you’re a community member and you haven’t ever made small talk with a peace officer that you’ve seen a dozen times, change that and say hello.  Introduce yourself and say thank you for doing a difficult job.

OPEN your heart to the humanity in the community.  Get past the stereotypes and the profiles.  Get to know people on a personal level.  If you’re a peace officer, check in on people who are struggling — not to make an arrest, but to genuinely care about how that person is doing.  Community members, find out when an officer’s birthday is and give that officer a birthday card with a Starbucks gift card inside.  Pray for the officers who patrol the neighborhood.

VOLUNTEER yourself in service to the community.  Community members, get together to host an informal officer appreciation event for the peace officers who are in your district.  Seated massage by the local massage therapist, home cooked meals and letters of appreciation really go a long way to break through some of the stress and tension of an incredibly hard job.  Peace officers, get involved with community events.  Become a coach for a youth team, offer to participate in community beautification efforts by painting or mowing lawns alongside other members of the community.  Get involved with each other so that you can be part of the solution in each other’s lives.

EMPOWER others to do the same.  Simply live out the above three steps and teach others in your circle how to do it too.  This is the step that pays it forward.  This is how we unite as one nation, under God, indivisible, with liberty and justice for all.

The practice of L.O.V.E. will transform a law enforcement agency, a ministry, a community group and an entire nation. I’ve seen it happen firsthand many, many times.  Are you ready to see America live up to its potential?  It’s time to make a choice.  Fear or Love.  I choose love.

Join me in using L.O.V.E. to tackle one of the most pressing issues of our time — bridging the gap that exists between peace officers and the rest of the community.  Visit www.walkingwhileblackthemovie.com and join us in the effort to create a film and accompanying training materials that will teach people how to L.O.V.E. and transform our nation.