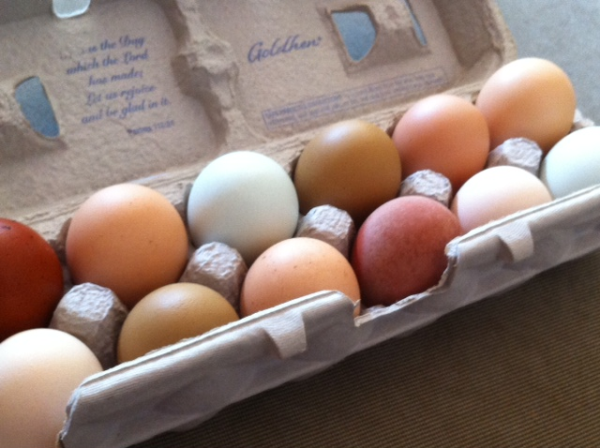 Food companies have hired marketing experts to make their Brand the most desirable, while putting catchy labels on inferior products they are misleading consumers into a false sense of quality.  Since eggs are one of the most accessible, easiest and cheapest sources of protein out there, it’s worth a little extra effort and well worth a few pennies to get the best available for your budget. Let’s separate fact from fiction, wade through the familiar sounding terms to understand the true meaning: A Guide to EGG CARTON LABELS.

There are basically 11 terms used to describe eggs and they are often found in combination to make it even more confusing.

Eggs are an exceptionally nutritious food. It’s not surprising, considering they contain everything necessary to build a chick!  But all eggs are not created equal. Anyone who has seen the tall, orange yolk, viscous white, and tough shell of a true pastured egg knows they’re profoundly different. So has anyone who’s tasted one. This has been vigorously denied by the American Egg Board and the Egg Nutrition Council, primarily representing conventional egg farmers, which assert that eggs from giant smelly barns are nutritionally equal to their pastured counterparts.

The magazine Mother Earth News decided to test that claim. They sent for pastured eggs from 14 farms around the U.S., tested them for a number of nutrients, and compared them to the figures listed in the USDA Nutrient Database for conventional eggs. Here are the results per 100 grams for conventional eggs, the average of all the pastured eggs, and organically raised eggs

Bodhi is an artist, inventor, instigator who believes in living gently and empowering others. He is the founding director of GMOfreeMARYLAND, campaign manager of NeedToKnowMARYLAND, board member of GMO Action Alliance. on the board of directors for Truth in Labeling Campaign. and president of GMOfreeNATION. Owner/formulator of Misogi-Naturals organic body care. Lifetime student of Reiki, Shamballa, Brumo Groning, Nuad Boran, Sukyo Mahikari and other healing practices Network marketing professional in the Energy and Nutrition Industries. Serial entrepreneur, public speaker, lobbyist and father.